Today, I have the pleasure of being part of the National Homebrew competition. This is an occasion that I have longed to see and get too, I can’t wait.

This is pretty significant, some 150+ (turned out to be 258) entries, being judged by luminaries such as John Keeling, Brewing Director at Fullers, Justin Hawke of Moor brewing in Somerset, Chris Kay & Brett Ellis of Bristol Brewing, Des DeMoor, Mike of the Durden Park Beer circle, and BJCP qualified judges, and little old me.

Considering that some of the most innovative, interesting and novel beers that I have had in the past few years have been Homebrewed, or Homebrewer-turned-probrewer created, I am very excited to see what’s going to be poured.

I am also intrigued to see how the mix of commercial brewers and BJCP functions; I can’t wait to learn, see how others approach and decide those deserving of applause.

So, leaving home in Sunny Kent at 4am, I arrived down in the west country some three hours later. I am just stuffing some food in my face and then a little drive up to Bristol, with the Hawkes of Moor Brewery.

I’m going to try to add some pics and notes during the day. I shall also
add to @beermerchants on Twitter.

Have a great Saturday.

First Beer of the day...

which turns out to be a gusher....

greg - dreadpenguin and I catching up over lunch.

much needed carb intake. Coffee isn't very good as a stomach liner for a beer event.

The scores of the IPA's.

How not to fill a bottle.

So, one lovely double IPA. And off for a burrito.

Congrats to Tom Dobson and Graeme Coates for great beers!

Well done Ali and Bristol beer factory for such a well done and interesting event!

Ali sorting out the prizes and raffle prizes.

I for one, would love to see the format of the judging pushed out for wider beer competitions. It works well, gives feedback and is measurable.

And the best beers won! I can’t wait to see next years event.

Ever dreamed of having your homebrew brewed at a commercial brewery ?  If so, get brewing. END_OF_DOCUMENT_TOKEN_TO_BE_REPLACED 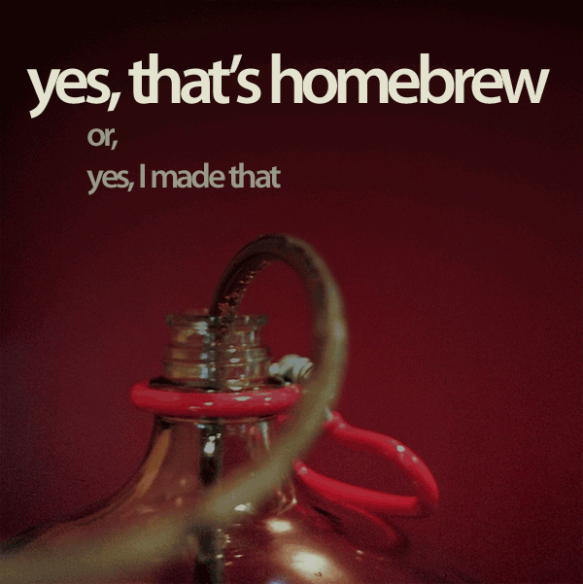 Sat in the kitchen, drinking a beer.  Not an uncommon occurrence for most of us,  but if I were to say that the beer that has prompted this little sesh at the keyboard was homebrew, I am sure you’d be surprised.

Homebrew, yes it’s the domain of beerdy weirdies in their garages, or folk  in their kitchens, boiling up cans of goo, adding sugar and more sugar “coz it turns to alcohol“, adding stuff and hoping to get hammered in a couple of weeks?  Then the cold, well, warm realisation that the beer that they are sampling, don’t taste like it orta.

Of course that’s homebrew, just like that stuff that your dad, uncle, brother made in the garage that made your mother irrate at the mess that they made. Eventually leading to a box full of Boots the Chemist odds and sods being sectioned to the shed to gather moulds, spores and fungus’s…

When I scan through the many pictures on my phone, I was a little shocked as to just how many there were of beer stuff.

My EOS20d had a fall earlier in the year, so I can assume that the phone somewhat tried to fill it’s shoes.  You can have a little insight into the stuff that I see, the antics that I get up to (with Angelo in tow), and the great beers that my girlfriend says has spoiled me… hell, she works for a brewery, can I blame her.  Certainly, it’s not the beers that I get in for you at Beermerchants.com – if you follow us on twitter, I am sure that you’ve seen a few of these… END_OF_DOCUMENT_TOKEN_TO_BE_REPLACED

Hops are expensive, big brassy American ones more so, but sod it! Last weekend I greatfully recieved a box of funky hops to play with, along with some purloined Perle. Then there were some homegrown fuggles and other varieties – dried in the airy loft space. Add some other American hops that journied back from California with me.

Seemingly I had a wealth of hops in front of me, the trouble is that they go stale – there isn’t much use for old or stale hops.

Recently Steve and I made a batch of a 10%. Double IPA – on the fifty litre kit – besides mash issues – we used about £60 in hops; varities like northern brewer, simcoe, Amarillo, centenial, and chinook, and cascade!! Hop heads favourites!! A fun and very hedonistic experiment.

Recent batches have been restrained on the hop front – a nice 6% brew for thanksgiving at steve’s – pale malt, 55l crystal, and chocolate malt, hopped with cascade, centenial, and northern brewer.

Then came pop othe hops – only 4.2% -but loads of hops all through. Cleaning out the hops from the freezer was great fun. Then dry hopping with the perle, typically a bittering hop, but what the hell! It’s only 50l.

HOP came out moderately clear – I think the sheer volume of hops hazes a shade, but it’s soporific!? But a great experiment all the same.

I know of one brewery that has a small pilot plant – and I hear that they’re lining up to brew some experimental batches and offer them in their tap room.. Why is it so far away?? I wonder how many others have a half barrel brewery along side their master kit?

When you read books like brewing up a business by Sam calagione – small batch brewing featured and was a foundation of the sucess of his business. We’re also seeing a number of commercial homebrewers come about – even though I hate that name – perhaps nano-brewers might be a better word.

I believe that experimentation with new hops, continental malts, and brewing techinques (and embrasing the accidental) – is a fundamental driver of brewing success! Size isn’t everything?

Wow, what a weekend.   This is a Monday ramble.   Mobile phone switched off.

Saturday, whilst I was brewing, I have my laptop around for many reasons.   1, Promash.  2, The Brewing Network. 3, WebRadio.  4, Watching what’s going on on BEERmerchants.com

OK, so the brewing was a nice batch of a “Bright Blond”.  Oxymoron?  none intended.   My brew-buddy was gallivanting around the Low Countries – Even so I fancied brewing.   I had a batch to run to keg; yes dear cask lover – KEG!  I have cask in my heart, but as you well know the shelf life of a cask of ale when opened is 3-4 days at best for ordinary drinking bitter – not that I make anything “ordinary”.  The beauty, more so the practicality is that with a 19L Cornelius keg you can run your batch into it, after primary, secondary, racking to tank (with a load of dry hop) and pop some C02 in the keg and it’s good to go for a good while.  With a few kegs, as I have you can swap between the Toasted Oatmeal Stout, The Wantsum Perle, the Bonkers Barley Wine, and crazy Coffee Stout that you brewed for a laugh.  A quick run through with water and you can swap the kegs quickly, and to what ever takes ones fancy.    Yes, this is still home brew, but as a once “professional”… (read, “I know how to clean“) – friends and worse, family are frequent house guests…. I don’t know why?

Home brewing is great fun, starting back when I did as a student with the once-time batch of Malt Extract and nasty yellow “fuggles” – they could have been anything, then dumped at the deep end in a little brew-pub, was a crash course in cleaning and very little in brewing.    Recent returns back to the fold of brewer have put a smile back on my face – reigniting that burn of desire to get back an have a go.    Throwing recent efforts under the noses of lumiary brewers has been an experience, note learning curve.    I’d much rather take the subtle but harsh advice of them though than piss-artist neighbours just out for the buzz.

Brewing in recent weeks has come on leaps and bounds, culminating in the nailing of a particularly irritating and nagging water issue. This was the “Learning/Reminding myself” that water company’s have the liberty to change the chemistry of the water allll to frequently.    Solved with a little help from here by installing Reverse Osmosis might seem extreme, but considering you can write on a chalkboard with the water locally, might give you a clue to the reason why.

I am finally feeling like I am getting close to what I have brewed at times.    The pleasure in creating the brew that became “Dark Conspiracy” at Eddie Gadds brewery – sharing the experience with good friends,  and seeing them laughing and joking on the release night was pleasure by the truck load – then seeing comment on the excellent Pubs and Beer Website – here – a neat experience and insight into the world of a brewer.

This is what beer’s about: the social lubricant.  Where I read that, I don’t know, but the years of traveling around beer and the people that I have the fortune to spend time with – and then reading it in the recent edition BeerAdvocate magazine, “beer is a democratic beverage” – yes it is.  and, I for one hope it stays that way.

Where this ramble started and ended, I have no idea why, or how.   Except I wanted to say thanks to all that bought the new Cantillon, the Drie Fontein, De Dolle, and the Dupont.  Then went to light my inbox up with “when is the Port Brewing/Lost Abbey? in?”, “Is it True?” and “can I order one of everything please!”

When, 1st week December, yes it is, and yes you can, but when it’s on the site.

Thank you so much!

Then a 11.30am meeting on Sunday in London with Mr Evans and Beckett, for Battle of the Brains, yes the BBC two show.  Well, fun it was.  Save for the taps in the loo and the message watch out for the high water pressure, ON THE BACK OF THE DOOR!?  after one had liberally doused the area that a man shouldn’t.  Clever huh!

and, check out the newsletter – here