It’s been hot, hot, hot down here – I really hope that elsewhere in the country has been enjoying such fanstastic weather, the Wimbledon tennis courts look scorched, the local fields around here are full of crops looking like they need harvesting – the weather is belting as a nearby colleague would say… END_OF_DOCUMENT_TOKEN_TO_BE_REPLACED

Drinking beer, it’s great isn’t it. I know, I do it enough – travelling way too far to be fair, just for that new flavour or style. A recent trip to the US, I was reminded just how diverse, great fun the shere numbers of different beers that are out there, and yet that distance afforded me time for reflection on just a few things, when I got back. END_OF_DOCUMENT_TOKEN_TO_BE_REPLACED

Ever dreamed of having your homebrew brewed at a commercial brewery ?  If so, get brewing. END_OF_DOCUMENT_TOKEN_TO_BE_REPLACED

My local brewery, Gadds, has got the transport a new coat!

Looks great! You can read more here… and look out for their ales, and bottles are here 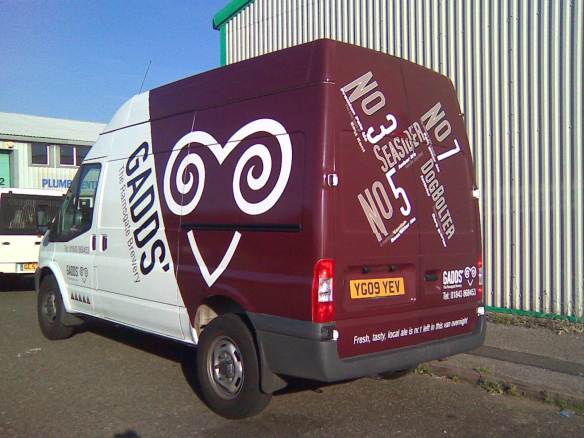 Sometimes I have to look around and just think that wow, haven’t things moved on!   looking back over the last few weeks, months and the life of this blog – wow.   I wish I could just dump my email inbox on to the blog, much of which I am sure that many other bloggers out there get and which I always read, often with my coffee around 11am. Especially some of the bigger UK brewers various PR companies… my comedy moments all to frequently!    I will be editing the Peter Darby interview this week and in my own slightly inept angle of English making the best of it.   Very interesing and something that I should revisit in time…

I also have a big email to reply to from my favourite local micro, which I must do!     I spent a really good friday night at the Planet Thanet BeerFest, with really good friends and great beers!  The down side was waking on Saturday realising I still had £20 of vouchers in my pocket, um, in the modern way, a kinda FAIL!    Saturday of the Bank holiday I went up to see Garrett at the Bull at Horton Kirby.  Interestingly Garrett does a lot of his communications through Facebook – here –  This was an awesome event, despite the weather; The Mussels were some of the best that I have had in years!  They even had bottles of very rare Belgians along with a great selection of draughts.    All in all Kent was a great place to be for beer last weekend!

1, The Coach and Horses, Dronfield.

After an extensive ballot of its 1050  members the Sheffield and District CAMRA branch, has declared its District  Pub of the Year for 2009 as The Coach & Horses, Sheffield Road,  Dronfield.

This is a remarkable turn around for a pub that  only just over 2 years ago was declared bankrupt and closed by the previous  owners. The pub was in a very poor state of repair. says Simon Webster,  Director of Thornbridge Brewery, who took over the running of the pub in  2007 and much hard work went into its refurbishment before we could reopen  it. The pub has since concentrated on quality beers from not only  Thornbridge (5 hand pumps dispense their beers, which often include one of  the brewery’s one-off experimental specials as well as the award winning  beers such as Jaipur IPA and Kipling) but also lagers and bottled beers from  across the globe.

Turning around a failed pub can take some  time reports Webster but a major step in the success of the pub he says was  the employment of Kiwi couple Catherine Mueller to manage the pub on a day  to day basis and she has been ably assisted by her partner Kelly Ryan – a  man with a unique insight into the Thornbridge beers as by day he is their  Head Brewer!  Catherine and Kelly have done a magnificent job in  making the pub a success and the CAMRA Award is recognition of this,”  continues Webster and he highlights “not only great beer but freshly cooked,  locally sourced food backed with excellent service as the key to the pub’s  incredible transformation.

The Coach and Horses  will now be entered into the East Midland’s County competition an early  round of the National Pub of the Year award. The pub has a celebration event  planned for Sunday May 24th and Monday May 25th when they will showcase a  number of beers from the Us leading micro brewers alongside a gourmet BBQ  and international live Blues Musicians call 01246 413269 for further information.

To further add to this I’m heading to see Kelly this weekend, with @Terry_Tibbs.     Have a listen to this excellent interview with Kelly on the awesome Brewing Network – here –

If you follow my far more regular waffle, um, microblog on Twitter, Struise beers have arrived at the depot.  They will be available in due course.

read this if you need more waffle

We frequently get approached for “free beer” as part of recompense for a promise of traffic and links etc.   We like to send beer to those who are putting the effort in, writing regularly, getting out there, getting to events and generally writing about beer from all aspects in a positive and enlightened fashion, about great beer!   We’ve been picked up by a bunch of bloggers who we all regularly read,  like the Reluctant Scooper, (who we hope will come back with flying colours, ), Knut Albert, and Mark Dredge at Pencil and Spoon.   We’ve also been highlighted by Blog-o-Beer which was very cool, very honest reviews too!

So, all in all a very busy period I just hope I can keep up!

The Belgian craft brewery Het Anker has come to an agreement to bring  the Lucifer beer back to the beer lover.

According to sources, Het Anker has purchased the production and marketing rights on the brand from Duvel Moorgat.

Lucifer beer first appeared on the market in early 80’s . After the ruin of Leifmans brewery late in 2007 and its takeover by Duvel Moorgat in 2008, the brand seemed to be in for a slow death.

Now, its new owner, Het Anker brewery is looking forward to championing the revival of Lucifer!

Expect to see it back in the UK by early Autumn.

The fashion, taste, interest call it what you will has been progressing this way for some time now.

Started really by Todd Ashman of the Flossmoor brewery, in Flossmoor, Illinois, now of 50/50 brewery in Truckee, California – on a professional basis, having observed homebrewers fermenting their beers in bourbon barrels – a subject that I recently bridged with him when I was in his company.   His early adoption of this technique blazed a trail for a unique style of beer, centred around the region between Detroit and Chicago – noted brewers such as Kuhnenn, Three Floyds, and Bells are keen proponents of this technique.     Sometimes you will see the beer barrel aged for a limited release project – or in somecases blended back into beer to accent everyday releases.   This technique is also starting to emerge in the beer mecca that is Belgium – the Struise brouwers have taken their very impressive Black Albert, and aged it in a Four Roses Bourbon barrel- called Cuvee Delphine – a quick look at beer rating sites like  Ratebeer and their top 50 will give you an insight into just how influencial this has been on many breweries.

Breweries in the UK have been slowly adopting, where as the midwest in the US has the proximity to a source of very expensive barrels – the UK brewer has had to turn to Scotland for similar materials.    Typically the beers tend to be big dark, imperial stouts, those with enough body and strength to carry the concentrated flavour notes rather than swamping them.   To mind one of the early adopters were the now highly regarded Thornbridge Brewery,  others have brought barrel aged beers out – Lovibonds of Henley and Gadds or Ramsgate, and I am sure you’ll have heard of the Paradox beers from BrewDog.    There is a close sense of origin between the Thornbridge Brewery and BrewDog – one of the brewers of Brewdog is once of Thornbridge.

So, here we have a brewery well versed in brewing a good imperial stout, and then they have sourced three different cask flavours – Mortlach, Macallan, and Caol Ila.    The Speyside, Highland and Islay notes will shine through the intense blackness of their beers – a perfect beer for the beer and whisky lover.

This is not a barrel fermentation as the Burton Union system suggests, or what Firestone Walker have adopted  – this is “simply” ageing a beer in a cask from a distillery – capitalising on the residual oak, char, and spirit bound flavours.    Considering that a used bourbon cask can weigh something in the region of 30lb heavier when fresh from the distillery, there are clear indicators just how much the barrels can influence the beer!   When travelling – some brewers aged their beers for 50 days, right through to 300+  some stored ambient, some stored cool to cold.   Some had developed a nose for particular notes that said to the brewer “‘I’m ready”  – this is still a new art form, and some are doing it very well, some come out as tarry alcoholic messes.

This is a great deal of investment for many breweries, making said beer, finding shipping and purchasing said cask – then to top it off – not being able to sell a beer for nearly a year!   I thank you, dear brewer for taking this chance!

I have had the pleasure of sampling some of the greatest (highly sought after) barrel aged imperial stouts, listed on Ratebeer, and I as much as I am not a big whisky lover – I really enjoyed the Highland.    Some might say that the idea of going through this process is a waste of good beer, or good whisky – and these are for the “beergeeks” out there – certainly not, they are a fantastic after dinner drink, contemplative and decadent with it.

They will also age very well.

Thornbridge St.Petersburg Highland, Islay, and Speyside cask aged will be available on Beermerchants.com – along with anything else I can get my hands on.

The NOVEMBER newsletter is out now!   here

Error: Twitter did not respond. Please wait a few minutes and refresh this page.

Error: Twitter did not respond. Please wait a few minutes and refresh this page.